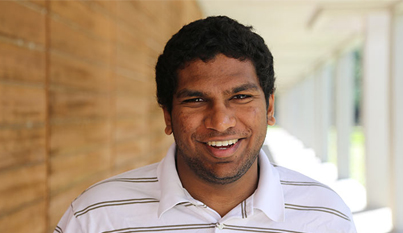 This fall, Rice University statistics alumnus Sathya Ramesh will begin his course of studies toward a doctoral degree in finance at New York University’s Leonard N. Stern School of Business.

Thinking back to his first year as an undergrad, Ramesh admitted he did not have a clear idea as to what he wanted to study. “Since then, I have become a big advocate for taking time to discover one’s potential.”

It was not long before he and his friends learned about the similarities between sports betting markets and financial market activity. During his sophomore year, he founded the Rice University Investment Club and served as its president. By 2018, the club had attended several out-of-state competitions and donated $4,000 of winnings and external funding back to the university.

“Although I had no definite ideas about what major I wanted to pursue at first,” said Ramesh. “Rice’s smaller size allowed for a lot of personal interaction and support from faculty, staff, and other students. Through the dedicated mentorship of many amazing faculty members, I discovered what really interested me and what I was good at.”

After double majoring in statistics and mathematical economics and earning a bachelor’s degree with distinction in research in only three years, Ramesh jumped right into getting a professional master’s in statistics, also from Rice.

“I am who I am today because of Professors Ensor and Dobelman at Rice’s CoFES, or Center for Computational Finance and Economic Systems, who helped me grow through research, teaching, and presenting at conferences and investing competitions,” he said.

Katherine Ensor is Rice’s Noah G. Harding Professor of Statistics and director CoFES. John Dobelman is a professor in the practice of statistics, director of the Professional Master Program in Statistics, and associate director of CoFES.

After earning his graduate degree in 2018, Ramesh was selected by the U.S. Federal Reserve Board for its Research Assistant (RA) Program in Washington, D.C. His primary role during the two-year program involved working in the Risk Analysis Section compiling software packages and reports to assess and monitor financial derivatives, such as futures contracts and credit default swaps (CDS).

The Federal Reserve examines the CDS exposures of dealer banks and major private firms to monitor systemic risk, especially during times of volatility. For example, the Federal Reserve has studied the role CDSs have played across all markets during the United Kingdom’s Brexit, JP Morgan’s London Whale episode, and during the recent COVID-19 Crisis.

“One of my projects involved looking at the legal records of every single CDS trade that certain banks made. I helped write the R code to establish a uniform approach to looking at all this data and making sense of what it says,” Ramesh said.

In spring 2019, Ramesh joined a group of Federal Reserve Board analysts who teach ECON 181: Data Analysis and Financial Literacy with R, an outreach course run by the Fed to undergraduate and graduate economics students at Howard University. For three semesters, Ramesh was a lecturer and helped restructure the curriculum. A large part of the course involves creating and presenting economic research projects based on real-world economic data. Ramesh also led bi-weekly teaching assistant sessions at the campus, helping and mentoring students through their assignments and research projects.

Ramesh said, “It was the most rewarding experience of my Research Assistant experience. Being a teaching assistant for CoFES and the Department of Statistics for five different courses prepared me to enjoy teaching and thrive as a lecturer at Howard. I have grown tremendously from working closely with the students and learning from their perspectives.”

“I could not have succeeded as a lecturer so early in my career if it had not been for my Rice graduate experience. The faculty members that not only gave me opportunities to serve as a TA, but also taught me how to teach effectively,” added Ramesh, who is keenly interested in pursuing a career in academia.

Much of Ramesh’s path over the past six years has been at the intersection of his strongest interests and his best skills. Through working as Dr. Ensor’s research assistant, Ramesh read several of Professor Robert Engle’s pioneering papers in financial econometrics.

Engle is the Michael Armellino Professor of Finance at NYU and a 2003 Nobel Laureate in Economics for his methods of analyzing economic time series with time-varying volatility (ARCH), which accurately captures the properties of many time series and methods for statistical modeling of time-varying volatility. Ramesh said Professor Engle’s work piqued his interests and motivated him to pursue a Ph.D. in Finance at NYU so that he can delve deeper into financial econometrics.

“I would not have become interested in this subfield if I had not had the opportunity to conduct research with Professor Ensor,” said Ramesh. “Being able to closely work with amazing advisers like her has inspired me to pursue a career in academia so I can hopefully similarly impact and guide students. I owe all of my success to the faculty members who invested their time and encouraged me every step of the way.”