Turning volatility to an advantage 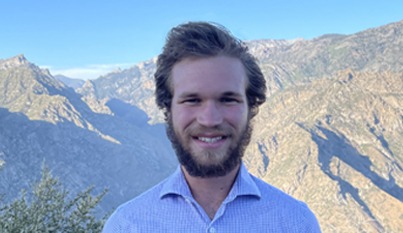 The research, which was part of Vicente Iglesias’ senior capstone project conducted through the Center for Computational Finance and Economic Systems (CoFES), was awarded the university’s Distinction in Creative Works and Research in Statistics.

The paper, titled “Modeling SPX Volatility to Improve Options Pricing,” co-authored by Iglesias and Rice undergraduate students Jared Aiman and Sumit Sarkar, was selected to be part of CoFES’s White Paper Series and is available through Rice’s Fondren Library. CoFES directors Katherine Ensor, the Noah G. Harding Professor of Statistics, and John Dobelman, a professor in the practice of statistics, served as the students’ advisers.

Iglesias took full advantage of Rice statistics and CoFES curriculum as he worked through his senior capstone project, which included the application of time series and forecasting methods, quantitative risk management, and knowledge of market models. He also took part in a quantitative trading internship education program at the Susquehanna International Group’s (SIG) offices in Philadelphia, PA, where he learned about options pricing.

“Many investors have had success by trading stocks using models that predict moves either up or down. Options investors, on the other hand, benefit from estimating future volatility and then positioning themselves to go long or to short volatility accordingly,” said Iglesias. “The benefit of our model is that it captures the interrelationship between the S&P 500 and the VIX.”

Iglesias graduated with a B.A. in statistics and in mathematical economic analysis, and a minor in financial computation and modeling from Rice this May with top honors. In August, he will begin his professional career as a quantitative trader with SIG’s corporate headquarters in Philadelphia.

“The Black-Scholes Model is one of the most popular models for calculating the value of an options contract, but it also has limitations,” Iglesias said. “The most significant are the assumptions that volatility is constant during the life of the option and that the logarithm of the stock prices moves as a normal distribution.”

The foundation of the students’ work involved a systems-level perspective to studying market dynamics and options pricing. Using an Autoregressive Moving Average (ARMA) model, they analyzed the expected future value of the closing prices of the S&P 500 (SPX) and the Volatility Index (VIX) from 2004-2020.

“Because unpredictable events sometimes happen that can cause sudden shifts in market values, statisticians use ARMA models as an important tool in time-series analysis to combine previous values and previous errors to give you an estimate of future returns,” said Iglesias.

Then to measure the uncertainty within the ARMA volatility estimate, the students applied a Glosten-Jagannathan-Runkle (GJR) GARCH model.

Lastly, to model both the returns of the underlying asset and the implied market volatility for options investing, they combined both models and applied a skewed t distribution for maximum likelihood estimation. 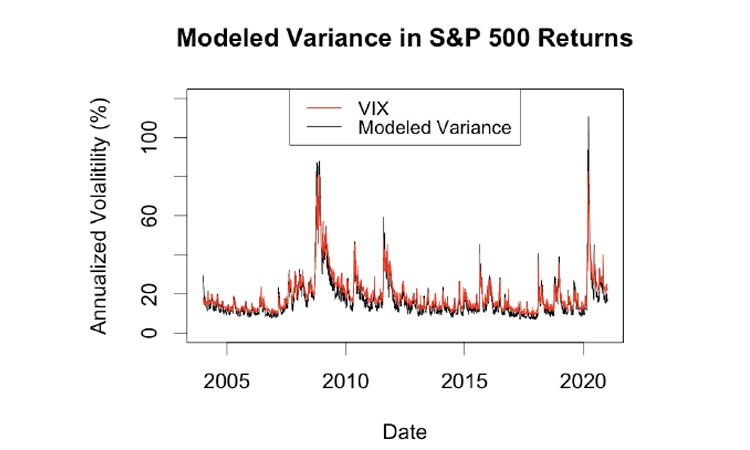 The image above shows the modeled variance of daily returns of the S&P 500 versus the VIX overlay. Rice University undergraduate students Vicente Iglesias, Jared Aiman and Sumit Sarkar’s model shows that variance processes are closely related but they occasionally diverge.

“Using our modified ARMA-GJR-GARCH model, and the error distributions we found the parameters that lead to the best explanation of reality,” Iglesias said. “I believe the theoretical framework can be translated into the development of volatility models for future CoFES students to pursue.”