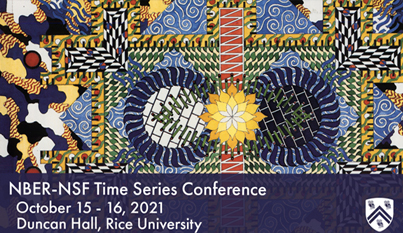 The NBER-NSF Time Series Conference, hosted by Rice University’s Department of Statistics and Department of Economics this past October 15-16, showcased 18 renowned experts in economic theory and statistical methodologies and poster session discussions on the latest findings by 40 leading scholars.

Supported by a grant from the National Bureau of Economic Research (NBER) and the National Science Foundation (NSF) to the Conference on Econometrics and Mathematical Economics (CEME), the annual NBER-NSF Time Series Conference is one of a series of seminars that have promoted research and communication between scholars in business and government for 45 years.

“The conference is a well-known forum for researchers to learn about the newest developments and challenges,” said Katherine Ensor, the Noah G. Harding Professor of Statistics at Rice, who chaired this year’s event. “Invited speakers to the 2021 event were selected from 130 technical paper submissions from respected and noted researchers who focus on a variety of topics in modeling and forecasting with applications in finance and economics, geopolitical risk and causal linkages between climate change and human crisis.”

The Time Series Conference, one of the premier and longest-running international meetings on the statistical analysis of time series data, has also developed strong ties with the U.S. Census Bureau, the Federal Reserve, the Center for Disease Control, and other non-university research centers.

“I’ve attended this meeting for many years and witnessed the benefits that multi-year initiatives provide in the exchange of ideas and research,” said Robin Sickles, Rice’s Reginald Henry Hargrove Chair of Economics and professor of statistics emeritus.

In addition to serving on the local scientific and planning committee, Sickles opened the 2021 program with lectures from the University of Pennsylvania’s Francis Diebold, New York University’s Robert Engle, who is a 2003 Nobel laureate, and University of Lancaster’s Granville Tunnicliffe-Wilson.

“Due to the COVID-19 pandemic, the 2020 conference was canceled and the 2021 conference was an all virtual event with operations managed from Rice’s McMurtry Auditorium, a large auditorium that normally seats 240 people,” said Ensor.

“The fact that the conference was online did not deter participants. On the contrary, the virtual format attracted over 280 registrations and we were able to connect with a larger international audience,” Ensor added.

Two centers at Rice managed by the Departments of Economics and Statistics – the Rise Initiative for the Study of Economics (RISE) and the Center for Computational Finance and Economic Systems (CoFES) – are dedicated to the study of financial markets and economic systems, the creating of learning environments, and the dissemination of the latest findings. Rice’s Creative Ventures Funds by the Office of Research also sponsored the 2021 NBER-NSF Time Series Conference.

Additional Rice faculty who also spoke at the conference and served on the local scientific and planning committee included Daniel Kowal, the Dobelman Family Assistant Professor of Statistics, and Xun Tang, the Henry S. Fox Sr. Chair and Professor of Economics.

The September 23-24, 2022 Time Series Conference will be hosted by Boston University.